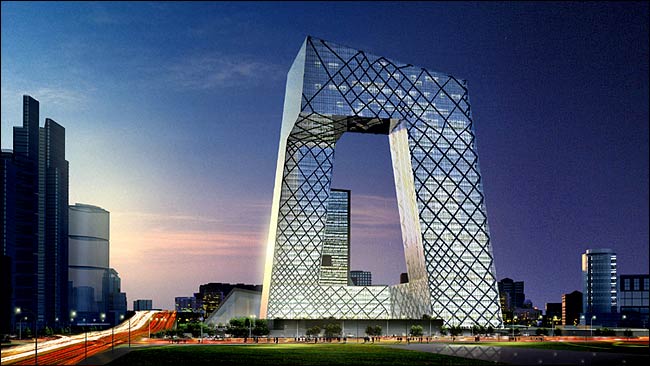 This has drewl power. It's the Rem Koolhaas and Ole Scheeren's design for the Central Chinese Television Tower in Beijing, which is now showing at the "Tall Buildings" exibit at the MOMA in NY. Rem Koolhaas most recently launched project was the Seattle Public Library. I'm also a fan of the the Swiss Reinsurance Headquarters in London which was designed by Norman Foster.

Organized by Terence Riley and Guy Nordenson, "Tall Buildings" documents 25 projects designed between 1991 and the present. An Industrialized Housing System designed by Richard Rogers in 1991-92 for a South Korean manufacturer is the oldest work in the show. The most recent is the Central Chinese Television (CCTV) Tower in Beijing, a triumphal arch remodeled in the style of M. C. Escher by Rem Koolhaas and Ole Scheeren/OMA."

"Tall Buildings" is at the New York Museum of Modern Art until Sept. 27.