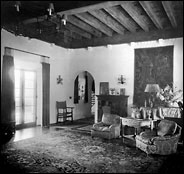 Steve Jobs is making news for something other than his business dealings.

In what could become America's highest-profile tear-down, Mr. Jobs, the Apple and Pixar chief executive, is seeking this town's permission to hit the delete button on the 1926 Daniel C. Jackling estate, a moldering manse designed by George Washington Smith, the architect who created the look of Montecito and Santa Barbara in the 1920's.

The house, built for Mr. Jackling, a copper magnate who died in 1956, sits on six wooded acres that Mr. Jobs, then 29, purchased in 1983. Preservationists have deemed the house historic, an important example of Spanish Colonial Revival architecture, one that currently stands empty and derelict at the end of a stone-lined cul-de-sac. Mr. Jobs, however, can't abide the place. He recently described it publicly as "one of the biggest abominations of a house I've ever seen."

Thanks for posting this to your blog. I've published my own post about this issue (http://www.richardsilverstein.com/tikun_olam/2005/01/steve_jobs_atti.html). I was wondering where you dug up the fantastic historic photo? WOuld you know where I can find other documentary photos of the home?

The photo came from the NYtimes article. While I would love to see/read more about this house I haven't been able to locate any more information than what you have at your post.

I found a few other interesting sources of information with a quick google.
a) a book on the architect
http://www.hennesseyingalls.com/architecture/097057200X.htm

Michael: I've been in touch with Clotilde Luce who's provided me with some cool pictures of the home & its grounds. Take a look at my revised post with the images: http://www.richardsilverstein.com/tikun_olam/2005/01/steve_jobs_atti.htmlShe has also created an organization to preserve the home: Uphold Our Heritage.